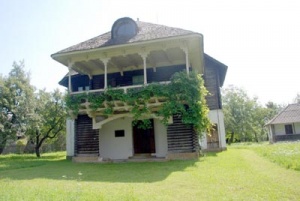 The artist Gabriel Popescu is one of the most brilliant Romanian engravers, a continuer of Theodor Aman and Nicolae Grigorescu’s art. Through his artistic and pedagogical work (for 25 years, he was a professor at the School of Fine Arts in Bucharest), Gabriel Popescu made ​​an important contribution to the Romanian engraving. The Museum, which is generically called ”The Gabriel Popescu Atelier House”, is located in the Gura Vulcanii Village (Vulcana Pandele Commune), Dambovita County, which is also the birthplace of the artist, a beautiful hilly area. The cultural settlement was opened on 15th May 1973, in the exactly house of the engraver Gabriel Popescu (1866-1937). The arrangements inside the house were possible thanks to the donations of the engraver’s family. All family contributed greatly to recreate the old atmosphere in which Gabriel Popescu lived and created his works of art. The construction of the house was completed in 1905, and it was done according to architect A. Clavel’s plans, which have been prepared in accordance with the artist’s drawings and wishes.

Upstairs, the building has two rooms: a large room, designed to serve as an engraving atelier and that was provided with a skylight, and the other one – the bedroom, fully equipped, where there are a number of household items (lamps, cups, a washstand, etc.), and also a library comprising engraving treaties, art and photo albums, Romanian history books, wood carving books, etc. At different times of the day, thanks to the presence of the skylight, an appropriate atmosphere for the meticulous metal engraving work is created. On the ground floor, there are a documentary exhibition presenting various photos and documents, dating from the studies period of the artist, and also photos and documents presenting the artist’s life and main art works. The first floor of the house shows the place where the artist spent most of his time, i.e. the atelier, equipped with a press with two cylinders operated by a crank, this sort of a press being unique in Romania.

In the atelier, both the work tools and the materials to carry out the metal engraving can be seen, and the stove on which the the artist used to dry his artworks after imprinting them.

The house is unique in the Romanian architecture thanks to both its inner functionality and its technical and aesthetical features. It combines the living spaces with the spaces meant for artistic creation, the latter being located upstairs – an extensive atelier, perfectly designed and equipped for the work for which it was intended: benefiting by Zenith light, through a large skylight, large amounts of air, heat source and specific furniture.

In terms of structure, the house respects the composition of the traditional houses in the area: a masonry ground on which a wooden beam floor is built, being visible from the outside. But structural similarity and inspiration concerning the carved wood decor is outdated by the innovation that the 2 authors of house brought, transposing the traditional architecture motifs into the modernity plan, which was integrated into the art style of year 1900.

Both parts of the building suffered serious damage in recent decades, due to both age and moisture, and biological attacks in the wood. Under these circumstances, it was not possible to use them anymore and that led to their abandonment and the need to move the heritage in order to protect it against degradation. The need for conservation is urgent as the building is threatened by destruction. Removing the building from the cultural circuit is a big loss for both the commune and the county, and for the artistic life of Romania as well.

By restoring and rehabilitating it, the atelier house would have the opportunity both to being re-introduced into the national and international museum circuit, and to be given back its museological importance. At the same time, this would particularly lead to a revitalization and continuation of the art of engraving, as a highly valuable artistic process, which an increasing number of artists use it to express their artistic feelings.

The creation here of a unique engraving centre, with engraving ateliers and accommodation facilities for participants in workshops and creation camps would make this place an attraction point for both Romanian and foreign artists, as an artistic melting pot and an important tourist attraction.

The “Gabriel Popescu” event, that the National Museum Complex of Targoviste Royal Court organizes every 2 years (the Complex being the holder of the atelier house) although it is, at present, organized at national level, can become an important international event and enter a large cultural circuit, thus contributing to the enrichment of the national and international cultural values. 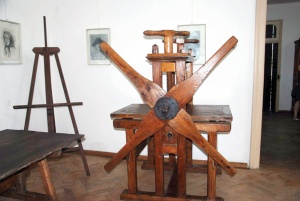